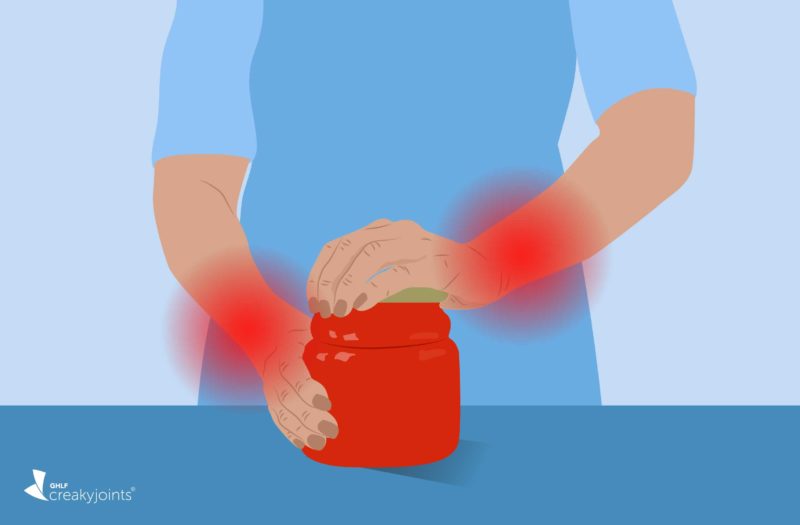 You’re likely well-acquainted with the frustration of a sticky jelly jar lid that won’t budge, a nail polish cap that’s glued shut, or a blouse with ridiculously tiny buttons. If you have arthritis, these scenarios aren’t just annoying — they can cause pain and damage to your joints, too.

Putting too much stress on joints can result in swelling, and the pain triggered by opening everyday objects may not appear until hours later or even the following day, per the American Academy of Orthopaedic Surgeons.

To keep your joints functioning properly in the long term, practice using your available range of motion by lightly stretching. For example, these gentle stretches can help prevent and manage arthritis pain.

Those strategies may include turning to items you already have at home (or are inexpensive to buy) for hard-to-open items. To get started, use these 10 objects to make everyday tasks far easier and less painful.

When your favorite lotion or foundation comes in a hard-to-open container, like one with a tiny twist-off top, pour it into an empty bottle with a pump or any other container that’s easy to use.

“When you find a container style that works for you, whether it’s one with a pump or a bottle of a certain width, replicate that with other products,” says Dorsey. “Pumps are nice because instead of using the tips of your fingers to open a small cap, you can use your palm and push down using force from the shoulder and arm.”

Anything with a rubbery surface can be helpful for hard-to-open containers, but rubber bands are particularly versatile. Wrap them around a jar lid, tiny cap, or anything else that’s difficult to open.

“This adds a little bit of resistance,” says Dorsey. “Rubber bands are perfect for nail polish, because the bottles are small and you can’t necessarily put it in a larger container.”

It may also be helpful to wrap a rubber band around door knobs, per Versus Arthritis, an arthritis charity in the United Kingdom. This gives you extra grip as you twist to open and close frequently used doors.

Whenever you can, replace the tiny buttons or zippers on clothing or bags with easier-to-use Velcro strips. You can buy Velcro strips with adhesive backing in rolls inexpensively online or at craft stores.

“Small buttons, zippers, and snaps all require putting the tip of the thumb and index finger together and using force,” says Dorsey. “Those are really small joints and muscles, so that amount of stress can cause strain.”

If you have decreased range of motion, just bringing those fingers together (also known as a pincer grasp) can be difficult, let alone adding force and coordination to unfasten the tiny buttons on your cardigan. If you prefer not to use Velcro, look for clothing and bags that are outfitted with magnetic buttons that make opening and closing easier.

You may think of these containers as a go-to for pills and vitamins, but they can also help you avoid the twisting and pressing of child-proof containers. Just make sure your medication is secured away from children, pets, or those with cognitive impairments.

“Pill organizers can be really helpful, especially if you’re dealing with multiple pill bottles,” says Dorsey. “Instead of opening three to four medication bottles every day, you can open them once a week and separate the pills into the organizer.”

Some pill organizers have buttons that make them even easier to open. If you don’t have a pill organizer at home, your pharmacist may also be able to put your medication in a different container for you.

Heat, air, light, and moisture can damage medications, which is why you often find them in orange containers that help to block ultraviolet light. Store your medications in a cool, dry place (not your bathroom medicine cabinet), such as a dresser drawer or a kitchen cabinet away from heat sources, recommends the U.S. National Library of Medicine.

This can double as a lever to remove the suction a metal lid has on a jar. Carefully place the spoon under the rim of the lid, and press upward until you hear a pop. You can then easily twist the lid off. Another option is to run the jar under hot water to help expand and loosen the metal lid.

“For things that are sticky like jelly, be sure to also wipe the lids and edges of the container before you close them,” says Dorsey. “Otherwise, it’s going to be much harder to open later.”

Similar to using rubber bands, simply slipping on a pair of kitchen gloves can make opening a jar or another container easier.

“Anything that gives you traction so you’re not sliding on the object can be useful,” says Dorsey. “Even using rubberized shelf liner as a jar opener by putting it over the top of the lid may help.”

In general, try to turn lids or doorknobs clockwise with your left hand, and counter-clockwise with your right hand. It may feel unnatural at first, but this can help protect against ulnar drift, a condition in which the fingers shift toward the pinky — something rheumatoid arthritis patients are particularly prone to.

“When you twist a jar lid or doorknob to the right with your right hand, you’re actually putting your wrist and your fingers in the exact position of deformity, and with a lot of force,” says Dorsey. “Switching hands can help protect joints in the long-term.”

It can be helpful to slip a rubber dish drying mat into your sink to secure an object you’re trying to open. “Adding a little extra traction is helpful, because it takes stress off the joints in the hand that’s opening the container,” says Dorsey.

Sometimes this can involve using more than one body part. For instance: You might sit down and hold a jar between your knees as you open it. In this scenario, you’re using the large muscles in your legs and your free hand to stabilize the object, relieving some stress on the small joints in your active hand.

Not only are nail polish bottles small, but they also tend to get crusty or sticky — making them even moredifficult to open. Dip a cotton swab in nail polish remover and give it a quick swipe around the rim of the cap. This will help dissolve some of the polish keeping the lid stuck.

Another option is to look for your favorite nail polish shade in a bottle with a square cap. “The square design actually gives you a flat surface to hold on to, providing more leverage,” says Dorsey.

You can also wrap a rubber band around the cap as an easy modification to create traction.

If pinching your fingers together to peel garlic cloves is painful or difficult, try this smart trick popularized by Martha Stewart (click to watch a video demonstrating this move). Place the head of garlic in one medium bowl, smash it with the bottom of another medium bowl, then use the second bowl as a lid. Shake for 20 seconds, or until the cloves are separated from their peels.

“Any time you can eliminate the force needed for a task like this, it’s a really smart modification,” says Dorsey.

Slippery, sudsy bottle caps can make shampoo, conditioner, and other items difficult to open in the shower. Keep a washcloth in the shower to strengthen your grip.

“If you’re trying to open a bottle of cleanser in the shower, this could be an easy way to do it,” says Dorsey. “Outside of the shower, you want to make sure it’s not dripping and causing a slip hazard.”

Check out PainSpot, our pain locator tool. Answer a few simple questions about what hurts and discover possible conditions that could be causing it. Start your PainSpot quiz.