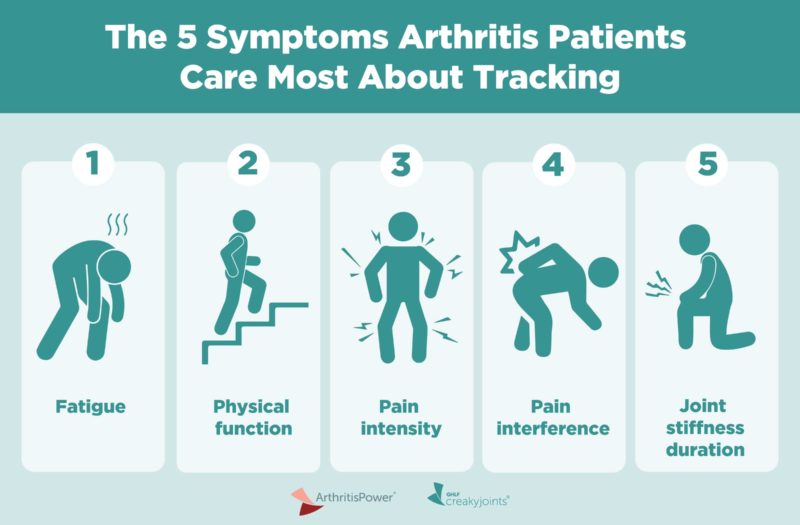 When you have an infection like a cold, you know when you have symptoms and when you feel better. With a condition like diabetes, you can track blood sugar and A1C levels to make sure the condition is well-managed.

But with chronic diseases like arthritis and related rheumatologic conditions, it is not always so clear-cut to know how you’re doing. Doctors can measure blood levels for underlying inflammation and do imaging of joints to look for swelling and damage, but this often doesn’t fully capture how patients feel on a daily basis or how their condition is impacting their ability to function and fully live their lives.

That’s why patient-reported outcomes (PROs) are so important. These are typically short surveys that assess various health symptoms, such as pain, fatigue, sleep, and more.

PROs are a patient’s own assessments of how arthritis affects daily tasks — including how you rank or define the difficulty of simple activities like getting in and out of your car or buttoning your shirt. They are a very important tool for measuring and monitoring disease.

PROs are also important during clinical trials for medications or other treatments, as they can assess how different therapies affect patients and the symptoms that matter to them.

The Global Health Living Foundation (GHLF) and CreakyJoints has started studying which PROs matter most to arthritis patients and we reported initial findings last year.

We recruited patients from our ArthitisPower research registry with various self-reported conditions — including rheumatoid arthritis (RA), psoriatic arthritis (PsA), ankylosing spondylitis (AS), systemic lupus erythematosus (SLE), osteoporosis (OP), osteoarthritis (OA), and fibromyalgia syndrome (FMS) — and asked them to select up to 10 different symptoms they wanted to track via short health assessment questionnaires. Study participants would then go on to complete the assessments once a month for the next three months. The symptoms that patients could track included:

After the three-month study period, we wanted to find out which symptoms patients found most important to track. How would they rank these various types of assessments relative to each other?

In research presented during the European E-Congress of Rheumatology 2020, held virtually by the European League Against Rheumatism (EULAR), researchers surveyed the 140 patients who were still taking PRO assessments by the end of the study period.

Here is what we learned.

After three months, patients were asked to rank the symptoms they had chosen to track in order to indicate which they felt were most important, then researchers weighted the responses to come up with a total summary score for each measure. The top five symptoms that patients wanted to track were:

“Across many of the conditions included in this study, fatigue is a common and often debilitating and misunderstood symptom,” says study co-author Kelly Gavigan, MPH, manager of research and data science at GHLF. “Patients anecdotally report that fatigue is one of the worst parts of having a chronic inflammatory disease, and that their loved ones and even sometimes health care providers don’t fully understand the magnitude and impact it can have on their lives. It’s therefore not surprising that people considered this symptom as most important to track.”

When the study began, participants chose an average of seven symptoms each to track each month. Each month, people could drop PROs, add new PROs, or keep the ones they were tracking. The average number of symptoms patients opted to track remained relatively steady throughout the study period: around 7 measures.

It’s interesting that study participants chose roughly seven symptoms to track (with a minimum of three and a maximum of 10).

“Rheumatologic conditions are complex and multifaceted in nature,” says Louis Tharp, executive director of GHLF. “In order to get a full picture of how they’re doing, patients may need to track more than just a single domain, like only pain, or only fatigue, or only depression. Tracking many different kinds of PROs over time, via an app like ArthritisPower, can give you a better sense of how your disease is affecting your health, mood, and lifestyle.”

While most PROs selected were used consistently over time, one PRO — RA flare — had a noticeable drop-off. While nearly 78 percent of those with rheumatoid arthritis selected this PRO to track at the start of the study, only about 15 percent were still using it after month three. More research is needed to understand why participants didn’t keep tracking this measure over time.

The percentage of patients who chose to track these mental health measures stayed fairly steady throughout the three-month study period. For example, about 54 to 55 percent of patients were tracking depression at the study start and at months one, two, and three.

So why didn’t these mental health PROs crack the top five?

“Regardless of their rheumatologic condition, patients prioritized tracking aspects of pain and physical function,” says says W. Benjamin Nowell, PhD, director of Patient-Centered Research at GHLF. “People generally think of these diseases in terms of their physical manifestations. For many arthritis patients, tracking how the diseases affect them in a physical way — in terms of pain and fatigue and joint stiffness — is most important, though this data show that many people still want to track aspects of mental health.”

If you are diagnosed with arthritis or another musculoskeletal condition, we encourage you to participate in future studies by joining CreakyJoints’ patient research registry, ArthritisPower. ArthritisPower is the first-ever patient-led, patient-centered research registry for joint, bone, and inflammatory skin conditions. Learn more and sign up here.

This study was supported by Eli Lilly, which is a corporate sponsor of the Global Healthy Living Foundation.