Many Fibromyalgia Patients Have Symptoms Consistent with Axial Spondyloarthritis 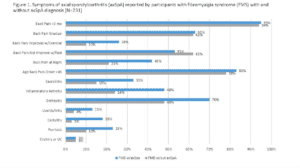 Fibromyalgia — a condition that causes widespread pain, fatigue, and sleep and cognition issues — is not uncommon. According to the U.S. Centers for Disease Control and Prevention, it affects about 4 million U.S. adults. But fibromyalgia is often challenging to diagnose and treat because it frequently occurs alongside other chronic diseases, including autoimmune or inflammatory types of arthritis.

One common area of confusion has to do with fibromyalgia and a type of inflammatory arthritis called axial spondyloarthritis (axSpA). For a variety of reasons, doctors suspect that axSpA goes undiagnosed in many people who have symptoms of it. Fibro may be one of those conditions that either co-occurs with axSpA or is mistaken for it.

Because fibro and axSpA are treated with very different medication regimens, if patients who think they have fibro could actually have axSpA, this misdiagnosis could have a deleterious impact on their health, as persistent untreated symptoms could lead to long-term joint damage, disability, and a significant decrease in quality of life.

Researchers, including those from our non-profit organization, the Global Healthy Living Foundation (GHLF), set out to learn more about this potential overlap and what it may signify for helping people get better care.

In research presented during the European E-Congress of Rheumatology 2020, held virtually by the European League Against Rheumatism (EULAR), researchers surveyed 231 patients who reported a diagnosis of fibromyalgia in our ArthritisPower research registry to understand more about their symptoms and patient journey.

The patients in the study reported having a diagnosis of fibromyalgia without also having a diagnosis of rheumatoid arthritis or psoriatic arthritis. They were asked whether they had a diagnosis of axial spondyloarthritis or ankylosing spondylitis (AS), then answered a number of different survey questions, including those that measure pain interference, sleep disturbance, and fatigue; the Bath Ankylosing Spondylitis Disease Activity Index; and a customized survey developed by the research team.

Here is what we learned.

Of the 231 fibromyalgia patients who completed the surveys, only 40 people reported also having a diagnosis of axial spondyloarthritis.

But many patients with fibro and without an axSpA diagnosis reported having symptoms consistent with those of axSpA. For example:

A full 12 percent of fibro patients in the study reported having all of the symptoms consistent with patient-reported versions of a set of common criteria for axial spondyloarthritis.