Patients with fibromyalgia, OA, RA at increased risk for self-harm 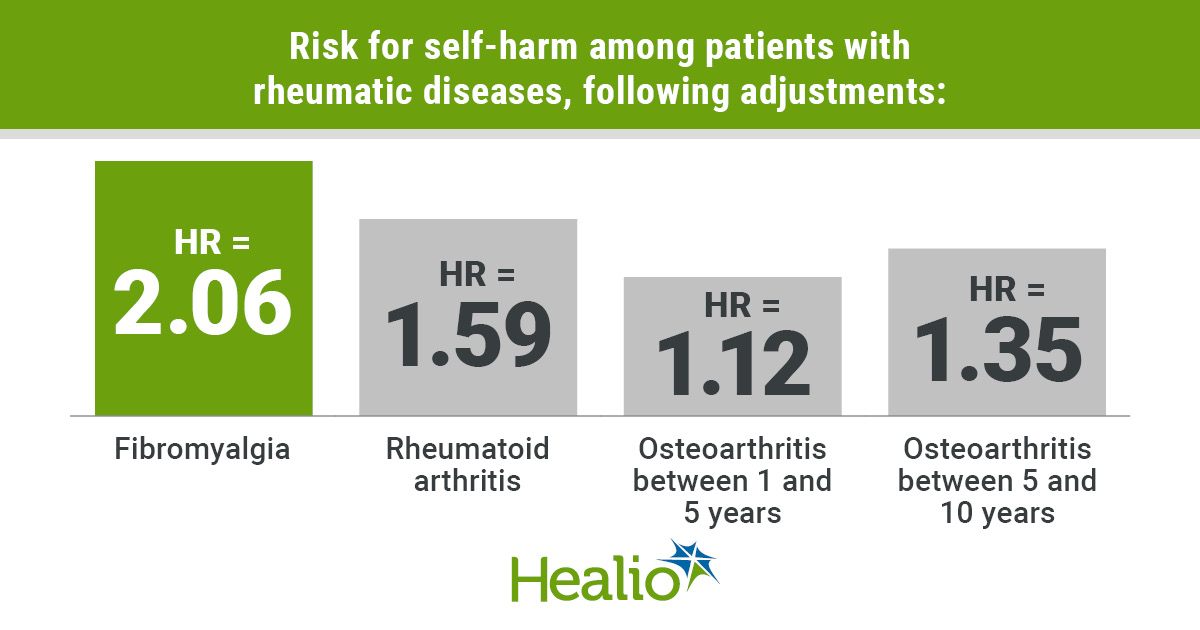 Patients with fibromyalgia, osteoarthritis or rheumatoid arthritis are at an increased risk for self-harm, compared with those without these diseases, according to findings published in Arthritis Care & Research.

“Our interest lies in examining and comparing the risk of self-harm in specific rheumatological conditions (ankylosing spondylitis, fibromyalgia, osteoarthritis and rheumatoid arthritis),” James A. Prior, BSc, MSc, PhD, of Keele University, in Staffordshire, United Kingdom, and colleagues wrote. “These are some of the most prevalent rheumatological conditions with known relationships to chronic pain and depression.”

“Poor mental health, especially a history of a depressive disorder, is a strong risk factor for self-harm and comorbid depression is frequently experienced by patients with these common rheumatological conditions, to varying degrees,” they added. “Although pain is on the causal pathway for depression, pain is itself an independent risk factor for self-harm and is commonly experienced by those with rheumatological conditions.”

To analyze the risk for self-harm among patients with various rheumatic diseases, Prior and colleagues conducted a retrospective cohort study of information from the Clinical Practice Research Datalink, which includes anonymized primary care records of about 7% of the UK population. Focusing on the period between 1990 and 2016, the researchers identified 10,484 adults with ankylosing spondylitis, 17,546 with fibromyalgia, 410,384 with OA and 23,205 with RA. All included cases were then matched to an unexposed cohort of the same size for each condition.

Prior and colleagues defined self-harm using medical-record codes following a rheumatic diagnosis. The researchers reported incidence rates per 10,000 person-years for each condition, including overall and year-on-year figures for 2000-2016. In addition, they used Cox regression analysis to determine the risk for self-harm associated with each condition, compared with matched unexposed individuals. Lastly, they adjusted and stratified their initial crude analysis based on age and gender. In addition, the OA findings were further stratified by disease duration due to nonproportionality over time.

According to the researchers, the incidence of selfharm was highest among patients with fibromyalgia (HR = 25.12; 95% CI, 22.45-28.11), and lowest among those with osteoarthritis (HR = 6.48; 95% CI, 6.2-6.76). Prior and colleagues reported crude associations between each analyzed rheumatic disease and self-harm, save for ankylosing spondylitis.

“Patients with rheumatological conditions have increased risk of self-harm compared to matched unexposed patients, but age and gender do not act as strong effect modifiers,” Prior and colleagues wrote. “The incidence of self-harm in these conditions has remained relatively consistent over the last decade and a half and therefore clinicians should be vigilant, explore mood, assess risk, and offer appropriate support and management, especially to patients with fibromyalgia.”