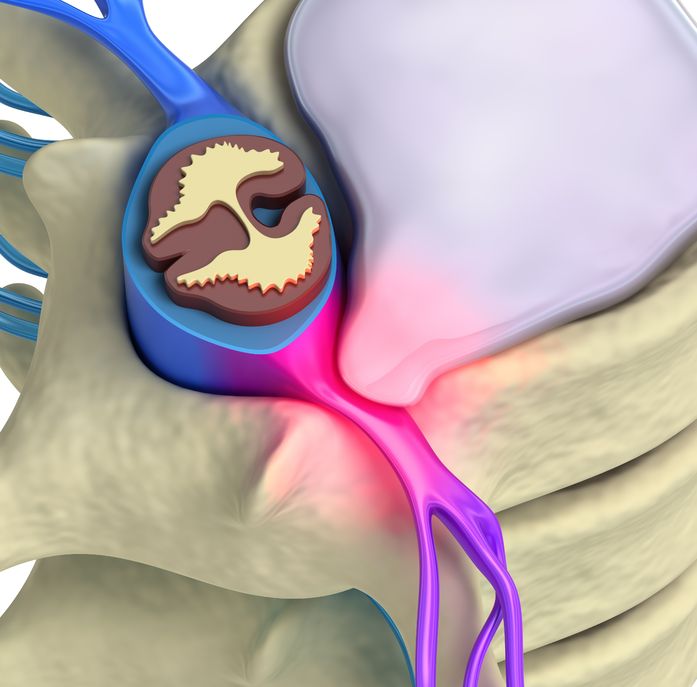 Herniated disc is a relatively common condition that can occur anywhere along the spine, but most often affects the lower back or neck region. Also known as a slipped disc or ruptured disc, a herniated disc develops when one of the cushion-like pads between the vertebrae moves out of position and presses on adjacent nerves. Herniated discs are typically caused by overuse injuries or trauma to the spine; however, disc conditions can also develop as a result of the normal aging process. It is also known that there is a genetic factor that contributes to the development of disc degeneration and herniated disc. In most cases, a herniated disc in the lower back will heal within six months, as the size of herniation shrinks with time via resorption. Surgery may be needed if medication, physical therapy and other treatments fail.

What is a disc? Spinal discs are cushion-like pads located between the vertebrae. Without these “shock absorbers,” the bones in the spine would grind against one another. In addition to giving the spine flexibility and making movements such as twisting and bending possible, discs protect the spine by absorbing the impact of trauma and body weight. Each disc has a strong outer layer called annulus fibrosus and a soft, gel-like center, called nucleus pulposus. There are fibers on the outside of each disc that attach to adjacent vertebrae and hold the disc in place. A herniated disc occurs when the outer layer tears or ruptures and the gel-like center leaks into the spinal canal.

The spinal canal has just enough space to house the spinal cord and spinal fluid. When a disc herniates and spills into the spinal canal, it can cause compression of the nerves or spinal cord. Intense, debilitating pain and alterations in sensation often occur. In addition, the gel-like substance inside the disc releases chemical irritants that contribute to nerve inflammation and pain.

What causes a herniated disc? As we age, the spinal discs gradually lose fluid volume. This process starts at about age 30 and progresses slowly, over time. As the discs dry out, microscopic cracks or tears can form on the outer surface, causing it to become brittle, weak and more susceptible to injury. The most common causes of herniated disc are:

What are the symptoms of a herniated disc? Pain from a herniated disc can vary, depending on the location and severity of the injury. It is typically felt on one side of the body.

If the injury is minimal, little or no pain may be felt. If the disc ruptures, pain can be severe and unrelenting. Pain may radiate to an extremity in a specific nerve root distribution if significant nerve impingement has occurred. For example, sciatica is frequently caused by a herniated disc in the lower back. Herniated disc can manifest itself with a range of symptoms, including:

How is a herniated disc diagnosed? History and physical examination point to a diagnosis of herniated disc. A herniated disc is likely if low back pain is accompanied by radiating leg pain in a nerve root distribution with positive straight leg raising test (ie, elevating the leg while lying down causes radiating pain down the leg), and other neurologic deficits such as numbness, weakness, and altered reflexes.

Imaging studies are usually ordered to confirm a diagnosis of herniated disc. X-rays are not the imaging medium of choice because soft tissues (eg, discs, nerves) are hard to capture with this technology. However, they may be used as an initial tool to rule out other disorders such as a growth or fracture. Confirmation of the suspicion of herniated disc is generally accomplished with:

Herniated discs sometimes heal on their own through a process called resorption. This means that the disc fragments are absorbed by the body.Most people suffering from herniated disc respond well to conservative treatment and do not require surgery.