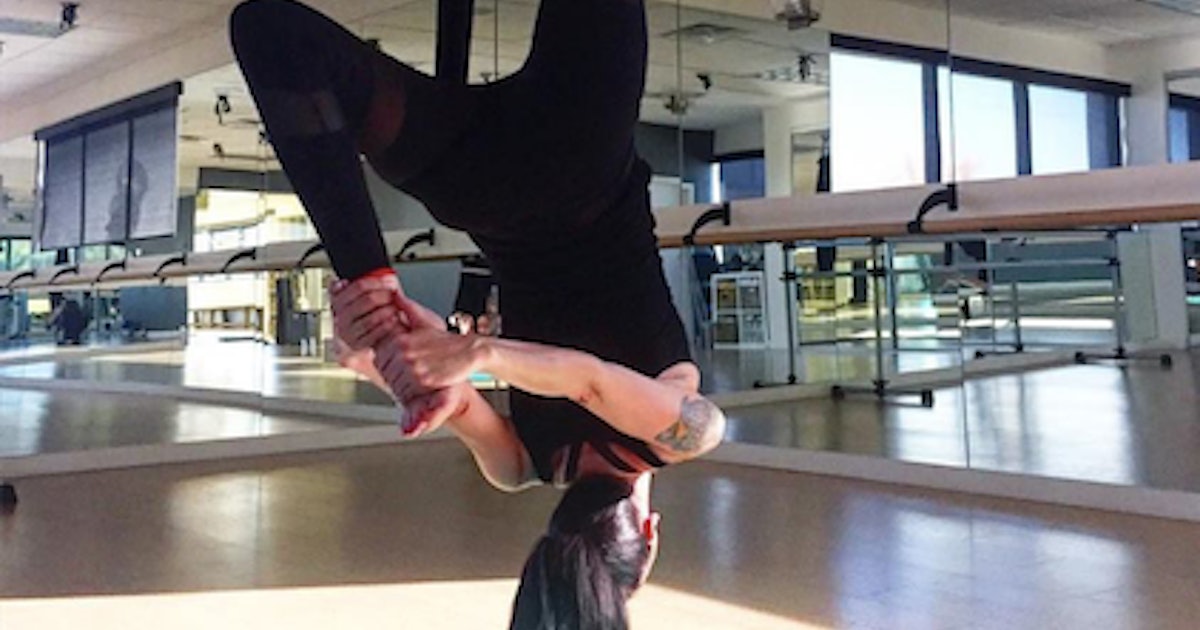 If you've ever wanted to pretend that you're in Cirque du Soleil, then you have to try aerial yoga. Aside from being fun, aerial yoga can possibly help you heal from physical pain or emotional trauma, an added bonus I wasn't aware of until I spoke with SPY — Scottsdale Pilates and Yoga Manager andaerial yoga specialist Stephanye Evans after a session. If you haven't heard of this yoga trend, it originally began in the circus arts. While traditional yoga poses are performed on a mat on the floor, aerial yoga is practiced on a silk hammock that hangs from the ceiling. All of the poses that can be done on the ground can also be completed in the hammock, but there are far more modifications, which is great for people who live with chronic pain.

Personally, I've tried to get into yoga dozens of times, but because I have chronic neck and shoulder pain I always end up feeling like I've been hit by a bus the next day. Because aerial yoga didn't put pressure on my neck and shoulders, I actually felt great the day after my session. Aside from providing relief from chronic pain, Evans also tells me that practicing aerial yoga can be a path back to the body for survivors of trauma.

Evans explains that for trauma survivors, there may be triggers associated with traditional yoga poses, which makes that particular therapy inaccessible to survivors. "What I like about the hammock is that is gives you the privacy to re-explore your body again." She adds that trauma survivors often disassociate from their bodies as a way to protect themselves, and returning back to a therapeutic relationship with the body can be difficult. "For me, a mission is to bring women in to explore their bodies in away that’s nurturing, which the hammock is, that is safe, embryonic, warm, and cocoon-like."

The Chalkboard Magazine reported that a yoga studio based in San Diego offered aerial yoga classes to military veterans with PTSDwhen the The Yoga Factory’s Mel Campanero partnered with the Love A Hero Foundation in 2013. Campanero echoed many of Evans' points, including how beginning the class cocooned inside the hammock for a short meditation practice helps facilitate healing. Additionally, being upside down offers a host of benefits to both the mind and body.

"The suspended inversions involved in this type of yoga have many physical benefits for the nervous system — a system that, in folks with PTSD, is normally quite taxed," Campanero told The Chalkboard. "AntiGravity yoga can help to erase the physical effects that our service members’ jobs have on their bodies, truly offering a new type of 'personal therapy,' as many of our clients like to call it."

Personally, I felt very cared for and safe both during and after my aerial session. The hammock does act as a sort of womb that holds and cradles your body. What's more is that being suspended forces you to get out of your head and focus your attention on your body in a way you might not be used to doing. Being able to complete the poses with the assistance of the hammock — without activating my neck — felt extremely empowering. It was kind of like doing a trust fall with myself.

Of course, you don't have to have chronic pain or a survivor of a traumatic experience to benefit from aerial yoga. "Being inverted helps the body to redefine its position in space, and it increases spatial awareness to make your body aware of where your arm is," Evans tells Bustle. "[The hammock] can be used as a prop and a tool to get you into a posture a little but deeper or to get you into a posture you might not otherwise be able to get into on your own. It also helps you build muscle memory with support."

And because there is zero impact on your spine, it can actually help reduce back pain. Author Dr. Joseph Mercola noted on his blog that aerial yoga can relieve chronic back pain without using an inversion table. I actually did have a lower back injury when I took my class, and not only did aerial yoga not make it worse, I actually felt better afterward. However, as with any new exercise, it's important to let your instructor know ahead of time if you have any injuries.

If those aren't enough reasons to try aerial yoga ASAP, another added bonus is that it gives you permission to feel playful and spend an hour reliving your childhood. If you're like me, being a kid included a lot of time swinging from tree branches and jungle gyms, which (sadly) is kind of frowned upon when you have to start adulting.