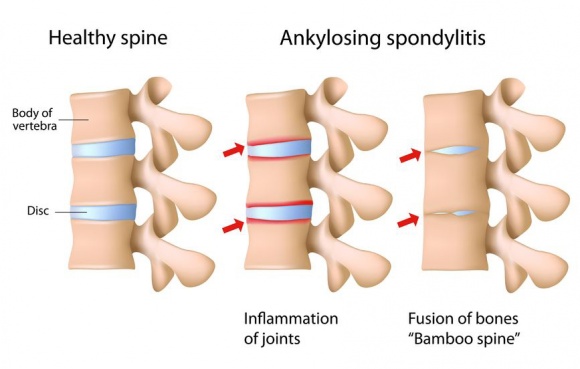 Involvement of the sacroiliac joints (SI joints) is classic as the disease progresses. When vertebrae or other bones/joints fuse together, the spine becomes stiff and immobile. Sometimes this can lead to significant changes in posture, such as kyphosis—an abnormal forward position of the upper spine resembling a hunched back. The severity of AS can vary greatly from person to person. Some people experience intermittent back pain, and others have severe pain and stiffness for long periods of time. Almost all cases are characterized by acute pain followed by temporary remission when symptoms subside. In some cases, AS may affect other parts of the body, such as the eyes.

Physical Therapy and Exercise Physical therapy and exercise are very important for people with AS. Not only can gentle stretching and exercise (as tolerated) help relieve back and/or neck stiffness; it can help to you stay as flexible and mobile as possible. Your physical therapist can prescribe a home stretching/exercise program, as well as help you with good practices for proper posture. Furthermore, cold therapies can help reduce inflammation, and heat can help relieve joint stiffness.