Reiki for Fibromyalgia: Does It Actually Work? | Everyday Health 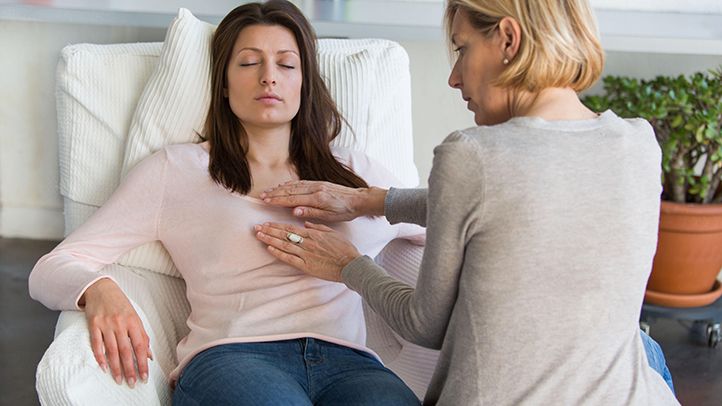 For the millions of people who have fibromyalgia, finding relief from pain, fatigue, and other symptoms is an ongoing process. Medication and talk therapy are often prescribed, but there are several complementary healing methods that may help with fibromyalgia symptoms, including the Japanese technique Reiki.

“Reiki is used for pain control, relaxation, and stress relief,” says Martha Lacy, MD, a hematologist at Mayo Clinic in Rochester, Minnesota, and a Reiki master.

Although it isn’t clear what is behind Reiki’s benefits, it almost always provides clients with some benefit, says Dr. Lacy. “People get very relaxed and can also experience pain relief; I’ve seen it get rid of headaches almost immediately,” she says.

Reiki is thought to work with a system of energy that flows through the body, according to Lacy. It is similar to the way acupuncture works with the body’s chi system, she says.

“In Japanese, the 'ki' in Reiki means the same as the word qi or chi in Chinese — life force or energy,” says Lacy.

“When clients have Reiki done, they don’t necessarily go to sleep, but they often get kind of drowsy and very relaxed. That feeling often produces stress relief and pain control,” says Lacy. “I don’t think that Western medicine necessarily understands or can explain how or why, because in medical schools, they don’t really teach us about these energy systems,” she says.

The thinking is that once a practitioner can get attuned to receive Reiki, that person basically acts like a hollow bone, says Lacy. “They’re just a vehicle for the energy to pass through and into the recipient,” she says.

It’s not clear what causes fibromyalgia, but experts believe repeated nerve stimulation causes the brains of people with fibromyalgia to change, according to the Mayo Clinic. The changes include higher-than-normal levels of certain chemicals in the brain, called neurotransmitters, that signal pain. It’s also believed that the pain receptors in the brains of people with fibromyalgia become more sensitive and react more strongly to pain signals.

People with fibromyalgia have pain in the connective tissue, and it can be debilitating, says Victoria Bodner, a Reiki master and licensed massage therapist who practices at the Center for Integrative and Lifestyle Medicine at Cleveland Clinic in Ohio. “I’ve had clients with fibromyalgia who feel pain all over — it would even hurt if I just placed a sheet over their bodies,” she says.

Even though Reiki touch is very gentle, patients in extreme pain may not want to be touched at all, says Bodner. “People can let their practitioner know before the session begins if they want light touch or no touch,” she says. In “no touch” Reiki, the practitioner will keep their hands a few inches or centimeters above your body at the standard hand positions. “The patient’s comfort is priority number one,” she says.

By allowing energy to flow, Reiki can help people “unplug,” or detach from the pain they are experiencing, says Bodner. “It can lower the sensation of the pain, so everything is not so heightened.”

It’s not unusual for people to leave a Reiki session with no pain or a great reduction in pain, she says. “They may come into the session at a 7 or 8 out of 10 on the pain scale and walk out at a 2,” adds Bodner.

RELATED: What You Need to Know About Reiki for Back Pain

“Reiki can definitely be used as complementary therapy to treat fibromyalgia, which means as an adjunct or addition to the treatment that their doctor prescribes or recommends,” says Lacy. How often or how long to use Reiki is something that needs more research, she adds.

A randomized, controlled trial published in the Journal of Alternative and Complementary Medicine in 2008 tested Reiki versus “sham” Reiki (Reiki performed by an actor and not a Reiki master) on 100 adults with fibromyalgia, with the primary outcome being the patient’s experience of pain at 4, 8, and 20 weeks (three months after the end of treatment).

Investigators found no benefit for pain or physical or mental functioning, leading the authors to conclude that “Reiki should be rigorously studied before being recommended to patients with chronic pain symptoms.”

Lacy points out that although that study didn’t find differences in the primary outcome, at the end of the trial the mean number of pain medications used by subjects was 29 percent lower in the Reiki group. “In my opinion, the amount of medicine the patients used was a harder endpoint than some of the other measures,” she says, meaning that it was more indicative of Reiki's effect.

RELATED: Can Reiki Help With Symptoms of Multiple Sclerosis?

A study published in December 2019 in the Journal of Alternative and Complementary Medicine examined the effect of just a single 45- to 90-minute session of Reiki on physical and psychological health. Although the study was conducted on people without any specific medical condition, many of the items measured were symptoms that people with fibromyalgia often experience.

Subjects were assessed before and after the Reiki session, and showed improvement in multiple areas including pain, fatigue, depression, and anxiety, leading the authors to conclude that Reiki has “therapeutic potential” for a variety of medical conditions that have physical and psychological symptoms.

“In my experience, Reiki has always provided some level of relief, though we do need more research about the best way to use it and what conditions it works best for,” says Bodner. “It’s important that it’s evidence-based,” she adds.

“If people are curious about Reiki, I encourage them to try it and be open enough to experience it. If they are uncomfortable, they can stop the session at any time,” says Bodner.

RELATED: Reiki for Beginners: Everything You Need to Know