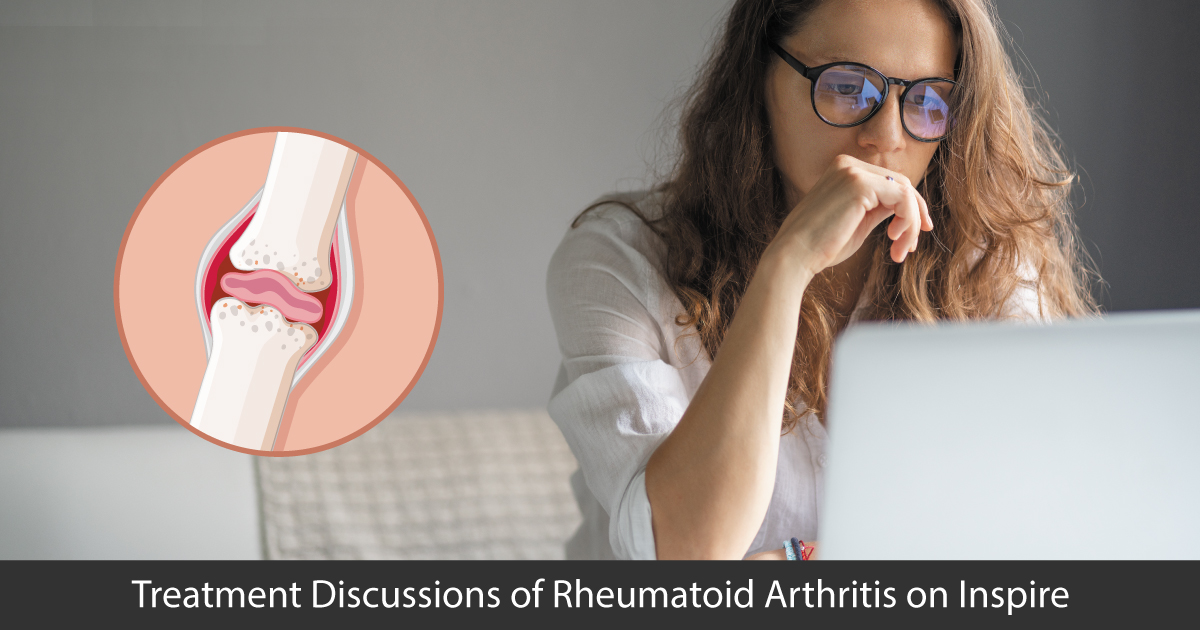 Treatment Discussions of Rheumatoid Arthritis on Inspire
By Kathleen Hoffman, PhD, MSPH
When someone says “arthritis,” do you imagine an elderly person? When joints deteriorate through age and use, that’s osteoarthritis. But patients with rheumatoid arthritis (RA) are fighting being actively crippled by their own immune systems, a disease that is unrelated to age. According to the Global RA Network, 1 in every 100 people gets RA. Both the disease and its treatments entail widespread consequences.1 It’s not surprising that patients and caregivers discuss RA-related symptoms and treatments across Inspire, but especially in the Arthritis Support Community on Inspire and the Autoimmune Support Community on Inspire.
One patient describes spending years just trying to get a diagnosis:
RA has been with me from child hood was told I had growing pains, but when I had enough of the pain I went [through] the doc to doc to find out what was really wrong and finally 13 years ago they found yes I have Rheumatoid Arthritis and chronic pain. — Inspire Member
Because pain and inflammation are common to so many diseases, patients with chronic illnesses may be trying to distinguish one kind of pain from another. The hallmark of RA is that the body is irritating the lining of its own joints, causing a chain reaction that results in chronic joint pain, bone loss, and deformity.2 One lung cancer survivor was consulting a rheumatologist to see if she now had RA and asked Inspire members for their advice:
So far I have had a rough time with the nerve pain – but am thrilled at the amazing response of my chemo and other therapies AND surgery.
But I am having REAL pain in all joints….stiffness….having trouble getting in and out of the car even. I am going to see a new PCP next week and will ask her to run labs to check on the arthritis thing…but was wondering if any of you had any experience on chemo induced Rheumatoid Arthritis? OR if you have any reliable sites that I can research it?
It’s a misconception to assume that a disease called “arthritis” is limited to the joints. RA can also damage the skin, eyes, lungs, kidneys, heart and blood vessels. About 40 percent of the people who have rheumatoid arthritis also experience signs and symptoms that don’t involve the joints, including fatigue and fever.2
One member commented:
It was amazing to me to discover all of the other conditions it triggered as well. I was also diagnosed of Srojens Syndrome, and Osteopenia. Every little activity hurts lately, and it feels like I am always tired. Anybody else?
In fact, RA and its treatments are discussed by over 39,000 members in Inspire communities simply because it’s associated with so many other kinds of illnesses: An article in the journal Rheumatologia stated, “The most common comorbidities reported in the literature include cardiovascular disorders, gastrointestinal, renal and pulmonary diseases, infections, osteoporosis, tumors and depression.”3 The journey for patients with RA varies with every individual — and can range across a number of illnesses.
Treatment involves restraining the pain-inducing inflammation, and can require interventions including surgery, lifestyle changes, NSAIDs, steroids, and the newer DMARDs — Disease Modifying Anti Rheumatic Drugs, including biologic agents.4 Because they are well-informed, patients on Inspire sometimes alert other members of topics they might want to bring to an appointment with their HCP.
For example, when a member in the Autoimmune Diseases community commented on having itching as a symptom, another member asked whether they’d considered a liver test because some medications have hepatic side effects. The member replied, “I just had a liver panel done and everything was normal (I’m on [medication name] so I get my liver checked regularly).”
Having a chronic illness with “arthritis” in its name but that affects more than just the joints, causes pain that isn’t always present, and that has symptoms that can be connected with so many other disorders leaves many patients feeling unheard or misunderstood by friends, family members, and even the medical professionals they turn to for help. When a member described an appointment at which she felt disbelieved about the extent of her pain, she received 16 replies, one of which was, “I don’t know that anyone, even doctors, who hasn’t had an autoimmune disease can relate to what you go through on a daily basis.”
But on Inspire — whether you classify RA as arthritis or an autoimmune disease, there are patients who can relate and they find that the entire spectrum of RA experiences and treatments is being discussed, every day.
Download this case study, “Product Promotion in High Growth Communities”