Tackling Both Physical and Psychological Pain 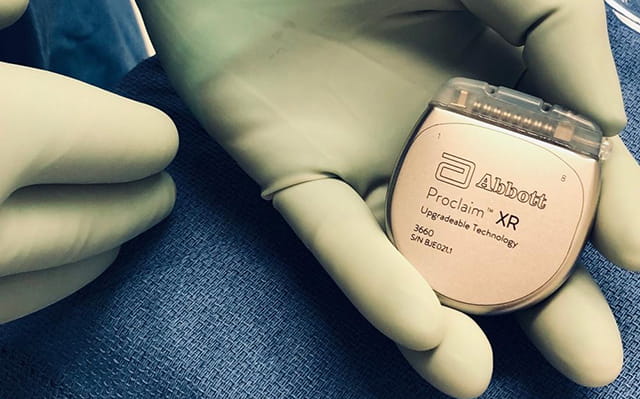 Chronic pain affects approximately 50 million — or one in five — people in the United States. The impact is felt across age groups, and the economic burden on the nation’s health care system exceeds $500 billion in direct medical costs, lost productivity and disability, according to a 2016 report.

Pain is often perceived as only a physical phenomenon. It’s easy to overlook its psychological toll. According to two review articles published in Pain Medicine, a significant relationship exists between pain symptoms and psychological maladies like depression — making it critical that we address the unmet mental health needs of patients with chronic pain.

As chronic pain therapies continually evolve — and especially as we look for alternatives to opioids — spinal cord stimulation (SCS) is becoming an area of growing interest and opportunity. Spinal cord stimulators are small devices implanted in the lower back of patients with certain types of chronic nerve pain. The device electrically stimulates the spinal cord to help block pain signals. The design and functionality of SCS devices have evolved over the past several decades to now include advances such as smaller batteries, wireless connectivity and novel stimulation patterns.

One of the latest advancements in SCS is using waveform — or burst — stimulation patterns, which mimic the natural signaling patterns found in the brain. The device stimulates the spinal cord in short, repeated bursts, rather than continuously. At the Center for Pain Medicine at UC San Diego Health, we were the first in Southern California to offer burst SCS therapy using a novel dosing platform, and we’re now exploring how to best customize the stimulation patterns for our patients. We recently published a dosing protocol in Neuromodulation: Technology at the Neural Interface.

The burst approach uses lower doses of stimulation to extend the system’s longevity. And when set to the lowest dose setting, the primary cell battery can function for years — rather than days — without being recharged. For patients this translates to a more hassle-free experience that can potentially last up to 10 years without recharging the device.

Burst stimulation may also help us overcome a major problem in SCS therapy — some patients using SCS can become tolerant to constant stimulation over time, and it loses its effectiveness. Because loss of pain relief is often the reason patients have their spinal cord systems removed, working around this issue is a vital part of long-term therapy.

When it comes to the effectiveness of burst stimulation, the most rigorous evidence collected to date is from our large systematic analysis of data involving pain centers around the world over the course of the last 10 years. We found an overall improvement in reported global pain scores. That suggests that, while patients can get improvement in their physical pain, burst SCS also had an impact on their psychological interpretation of pain and can also potentially alleviate suffering. Compared to baseline, patients who received burst stimulation had a reduction in the most sensitive clinical scales used to measure the psychological component of pain, including catastrophizing, pain vigilance and awareness.

As we continue to explore advancements in neurostimulation and the need for innovative therapies in chronic pain management — options that address the physical and emotional components of a patient’s well-being are critical — it is indeed an inspiring time to be working in this field both as a physician and the patients that we treat.