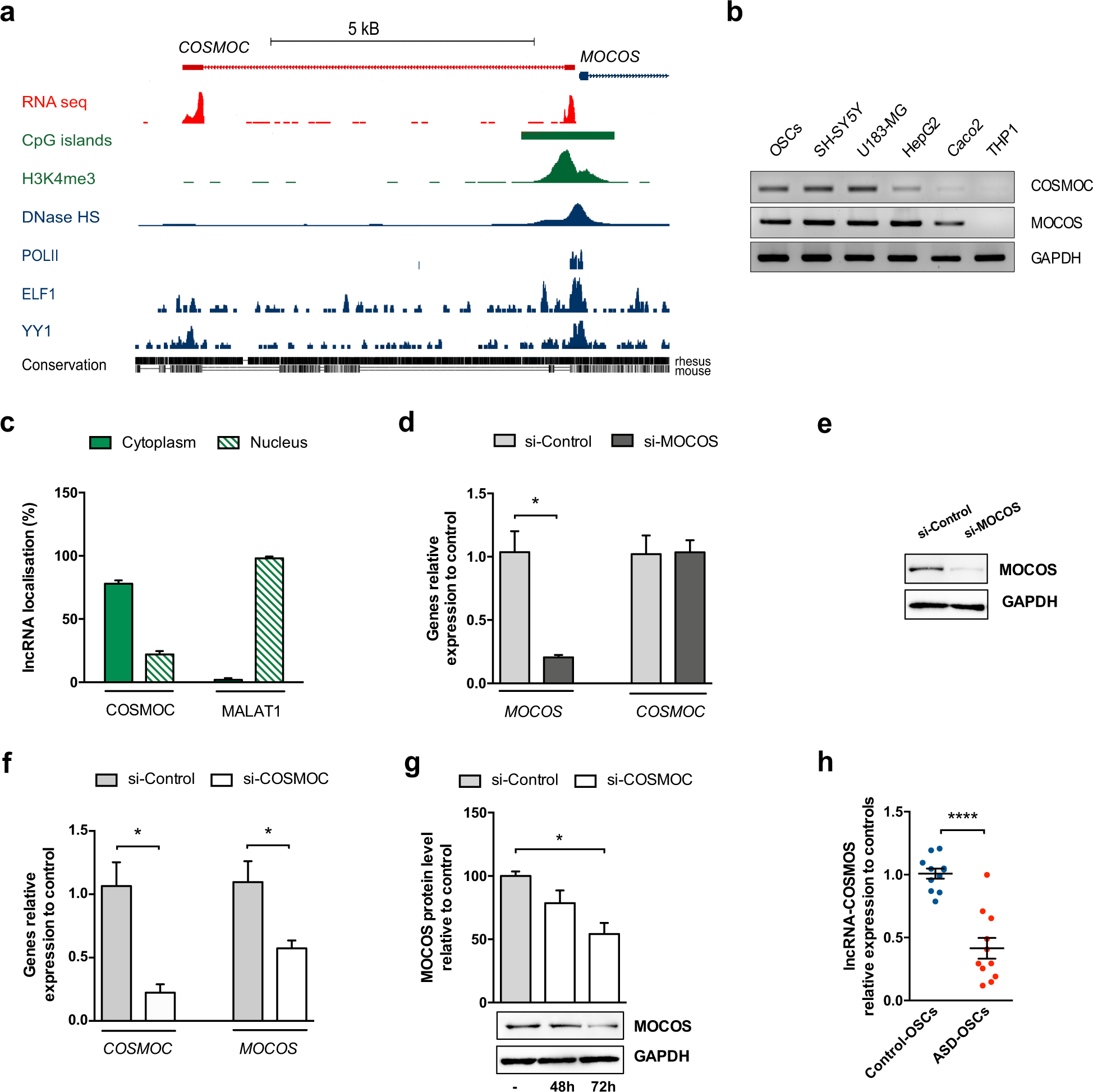 As a first attempt to apprehend the transcriptional control of MOCOS expression, we knocked down several putative upstream regulators, as detected using MatInspector (Genomatix) and TFBind software, but none of them successfully deregulated MOCOS expression (Supplementary Fig. 1a–c). We then used the data generated by advanced genomic tools, such as ENCODE and FANTOM5 and identified a divergent transcription in the MOCOS promoter region. This GC-rich region (GC- content: 65%) induces a transcription initiation on both sides with opposite orientations, generating an upstream antisense lncRNA near the 5’end of MOCOS, to which we coined the name COSMOC (Fig. 1a). COSMOC is a 609 nucleotides long and polyadenylated RNA (Supplementary Fig. 2a). Similarly to many other lncRNAs, it contains only two exons [19], separated by a long intron of 6845 bp and the noncoding anti-sense initiation of COSMOC is located 73 bp upstream of the transcription starting site of MOCOS (Fig. 1a and Supplementary Fig. 2b). COSMOC has no evidence of coding potential as indicated by its absence in protein database, a low PhyloCSF score [20] and no open reading frame longer than 150 nucleotides. Consistent with a crosstalk between coding and noncoding transcripts arising from the same locus [21], COSMOC and MOCOS exhibit a broad and similar pattern of expression across different human cell lines and tissues (Fig. 1b and Supplementary Fig. 2c). Of note, cell fractioning followed by qPCR analysis revealed that COSMOC can be found in the nucleus but it is predominantly located in the cytosol of OSCs (Fig. 1c), suggesting that its mode(s) of action on cellular mechanisms should not be reduced to a transcriptional regulator.

To assess the functions of COSMOC and determine whether it can regulate MOCOS expression in a cis manner, we decided to use small interfering RNAs (siRNAs) to deplete both genes in human OSCs. When compared with cells transfected with scrambled small interfering RNAs (si-Control), siRNA directed against COSMOC (si-COSMOC) significantly diminished MOCOS transcript (Fig. 1d) and the corresponding protein by almost 50 % (Fig. 1e). In contrast, siRNA directed against MOCOS (si-MOCOS) did not affect COSMOC expression (Fig. 1f, g). Of note, this effect on MOCOS was found specific since COSMOC depletion did not alter the expression of ELP2, its upstream neighbor gene (Supplementary Fig. 2b, d).

Considering our previous observations that revealed the deregulation of MOCOS in OSCs established from our cohort of ASD patients (8) we then measured the expression level of COSMOC in these same cells. Strikingly, we observed significant lower levels of COSMOC expression in all patients, an Asperger patient being the exception, when compared with their respective age- and gender- match healthy controls (Fig. 1h). This data prompted us to study further COSMOC and identify how its downregulation could play a role in ASD pathology.

To start identifying putative roles of COSMOC, we performed a transcriptomic study on OSCs from two healthy individuals in which we knocked down COSMOC. We found a pool of 639 mis-expressed genes, of which 150 were upregulated and 477 downregulated (Fig. 2a and GEO database GSE122434). As expected, COSMOC-depleted OSCs cultures showed that MOCOS was downregulated (fold change: −1.36 and −1.86 in individual 1 and 2, respectively). Of higher interest, among the top mis-expressed genes upon COSMOC depletion, eleven of them - ALDH9A1, DHCR7, ENPP2, FABP3, GLO1, GLUL, LIPA, MOCOS, PPT1, PTBP2, SEMA5A - have been previously associated with ASD (1-4; https://gene.sfari.org/). Furthermore, DAVID-based gene clustering analysis revealed two significantly distinct groups (Fig. 2b). The first cluster (enrichment score 3.21) included genes involved in lipid and sterol metabolism or cholesterol biosynthesis, whereas the second one (enrichment score 2.94) was composed of genes associated to nucleosome core, methylation and chromosome processes. Under the designation “Oxidation-reduction process”, gene ontology classification indicated an altered detoxification machinery (Fig. 2b and Supplementary Table 3). Dysregulation of several ASD-associated genes and some genes involved in synaptic transmission or neural development were further validated by qPCR analyses (Fig. 2c–e). These data suggested that COSMOC modulates the functioning of relevant cellular mechanisms formerly implicated in ASD. Of note, MOCOS downregulation did not alter the panel of genes we tested, indicating that putative functional effects of COSMOC downregulation in ASD may act through MOCOS-independent mechanisms.

In light of our previous data showing an increased ROS production in ASD patient-derived OSCs, we next decided to measure the number of stressed cells in COSMOC-silenced conditions. We observed a mean increase of 39.7% (Fig. 2f and Supplementary Fig. 3a–c) in the number of stressed cells from those cultures treated with si-COSMOC. Since depletion in MOCOS and MOCOS-dependent enzymes (i.e., AOX and XDH) induces ROS (Supplementary Fig. 3a), we next treated OSCs for various time durations with hydrogen peroxide (HO), a potent catalyst of ROS. By doing so, we assessed whether the disturbed redox homeostasis was a consequence of COSMOC depletion or COSMOC-induced MOCOS exhaustion. As shown in Fig. 2g, cells started transcribing COSMOC before MOCOS, suggesting that, within the COSMOC/MOCOS duo, COSMOC is the first to respond to oxidative stress.

LncRNAs being known as key regulators of neural differentiation [11, 22], and ASD being primarily associated with neurodevelopmental disorders, we next examined whether COSMOC modulation could impact on neurodevelopmental-like processes by using in vitro strategies. First, and to test its potential role during neuronal differentiation/maturation we analyzed the dynamic expression of COSMOC in SH-SY5Y, a human neuroblastoma cell line able to differentiate into a homogeneous population of neuron-like cells [23]. As shown in Fig. 3a–c, SH-SY5Y cells exhibited a rapid and progressive increase of COSMOC expression during the differentiation procedure, reaching an 8-fold increase in 9-day old differentiated neuron-like cells. In parallel, MOCOS expression did not change throughout the differentiation. Of importance, and validating the acquisition of a post-mitotic phenotype in those differentiated cells, we observed an inversed correlation between CDK1 expression and MAPT expression (Fig. 3b), with CDK1 being involved in cell cycle whereas MAPT is critical for neuronal maturation. Neuronal differentiation was further confirmed by the acquisition of morphological changes resembling neuronal-like morphology but also by the expression of the neuronal marker MAP2 as detected by immunocytochemical analysis (Fig. 3c).

Considering our initial observations we next investigated the effects that COSMOC knockdown may have on SH-SY5Y-based neuronal differentiation (Fig. 3d and Supplementary Fig. S4a–g). During the first 5 days of differentiation, no change was observed in COSMOC-downregulated differentiating neurons when compared with scrambled-siRNA treated ones (Fig. 3e–g). However, from day 6 of differentiation and onward, COSMOC knockdown caused morphological changes including cell shrinkage. Because these changes are important features of programmed cell death in neurons, we scored alterations in nuclear morphology and caspase3 activation (Fig. 3h–k). At Day 5, we observed a significant higher number of apoptotic nuclei in COSMOC-downregulated neuronal-like cells, with a condensed and fragmented chromatin (Fig. 3h, i) while cell death was confirmed by a substantial increase in active caspase-3 (Fig. 3j, k). Of note, despite a slight increase in the number of apoptotic bodies, no significant impact on neuronal cell death was observed upon MOCOS downregulation (Fig. 3i), suggesting that COSMOC may act on neuronal cells in a MOCOS-independent manner. In that regard, it is worth noting that, as specified in our previous report, all-except-one ASD patients of our cohort are suffering from a loss of brain volume, atrophy or dysmorphy [8]. These results indicate that COSMOC could be a critical player in processes controlling neuronal survival and may participate to neurodevelopmental processes.

Therefore, in view of the fact that ASD pathogeny is perceived as a neurodevelopmental disorder that takes place during the initial steps of brain development, we asked whether COSMOC might be able to interfere with early developmental processes. Using the human induced pluripotent stem cells (hiPSC) technology, we first investigated the dynamic expression pattern of COSMOC during differentiation into neural progenitor cells (NPC). Interestingly, using two distinct induction protocols, we observed a burst of COSMOC expression as early as day 1 after neural induction of hiPSCs. This moderate increase was followed by a rapid but progressive decline during the next few days of differentiation until COSMOC expression became undetectable in differentiated NPCs (Supplementary Fig. 5a, b). The efficacy of our differentiation strategies was confirmed by PAX6, SOX2 and NESTIN immunostaining in hiPSC- derived NPCs and TUJ-1 and MAP2 staining in NPC-derived differentiated neurons (Supplementary Fig. 4c).

In order to trace the effects that COSMOC knockout could have on the transition from pluripotency to neural/neuronal stages, we next used the CRISPR/Cas9 technology and successfully derived two different knockout (COSMOC) hiPSC lines (Supplementary Fig. 5d, e). COSMOC hiPSCs and their respective COSMOC isogenic control line were differentiated into NPCs and we examined the expression of a small subset of neural progenitor associated genes (i.e., VIMENTIN, SOX2, NESTIN). Overall, Supplementary Fig. 5f–h show that the selected genes followed a similar trend of expression upon neural induction, which indicates that knocking-out COSMOC is not sufficient to impair the generation of neural progenitors. However, we cannot rule out the possibility that those NPCs are not phenotypically identic to the ones derived from COSMOC iPSCs.

To determine potential changes resulting from COSMOC downregulation during SH-SY5Y differentiation, we examined the dynamic transcription pattern of genes selected from the aforementioned microarray data. Interestingly, a significant increase of PTBP2 expression was observed throughout the time course of differentiation of SH-SY5Y depleted for COSMOC (Supplementary Fig. 6). Since the introduction of a premature termination codon in PTBP2 transcripts results in their degradation via nonsense-mediated decay (NMD) [24], we examined the ratio of inclusion/exclusion of exon 10 (unspliced/spliced mRNA) in undifferentiated versus differentiated COSMOC-downregulated SH-SY5Y. Figure 4a shows a significant increase of PTBP2 exon 10 inclusion and Fig. 4b, c indicate a nearly 50% increased expression of PTBP2 protein level when si-COSMOC-treated cells were compared with control cells at day 5 of differentiation. In a similar way, a substantial rise of exon 10 inclusion was noticed in COSMOC-targeted OSCs (Supplementary Figure 6a). Of note, PTBP2 was never disturbed in si-MOCOS treated cells (Fig. 2e, Fig. 4a–c and Supplementary Fig. 6a) and PTBP1 expression, a splicing regulator of PTBP2 [24], did not changed during neuronal differentiation of si-COSMOC–treated cells (Supplementary Fig. 6b). These data demonstrate that COSMOC downregulation induces the increase of PTBP2. This may occur directly or indirectly by either impairing PTBP2 autoregulation or disturbing the trans-splicing activity of its upstream RNA-binding regulators.

Of major interest, PTBP2 controls a genetic program crucial for neuronal maturation that regulates a variety of target genes including GABA receptors but also Gephyrin and PSD95 (Postsynaptic Density Protein 95), representing pivotal proteins for synaptic maturation and plasticity [25, 26]. Since PTBP2 may inhibit the inclusion of PSD95 exon 18 [24], we decided to assess exon 18 splicing in COSMOC-downregulated SH-SY5Y cells ongoing differentiation. As shown on Fig. 4d, although no difference was observed in undifferentiated cell, knocking down COSMOC significantly decreased exon 18 inclusion (about 40%) in differentiated cells at Day 5. Altogether, these data support the notion that COSMOC deregulation may impair synapse development. Conversely, MOCOS knockdown failed to i) interfere with normal development of SH-SY5Y cells and ii) perturb COSMOC potential targets, supporting further an uncoordinated regulation of the transcriptional bidirectional unit, during neuronal differentiation (Fig. 4a–d, Supplementary Fig. 6a).

Finally, we assessed PTBP2 expression in ASD patients. We observed that the unspliced isoform of PTBP2 was upregulated in all ASD patients’ OSCs (Fig. 4e, f). These observations suggest that, in low COSMOC-expressing neuronal cells deregulation of PTBP2 and synapse-associated genes may alter neurotransmission and induce neurological disorders, including ASD.