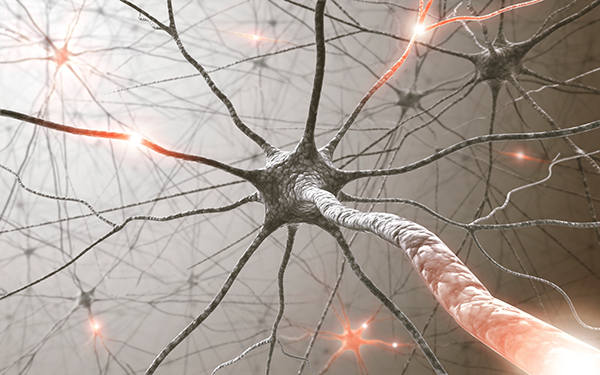 Scientists at the University of Rochester Medical Center (URMC) have demonstrated how human glial progenitor cells (hGPCs) transplanted into animal models of multiple sclerosis, and other white matter diseases, can migrate through the brain, remyelinate damaged nerve cells, and restore function. The study provides one of the final pieces of scientific evidence needed to advance this treatment strategy to clinical trials. “These findings demonstrate that through the transplantation of human glial cells, we can effectively achieve remyelination in the adult brain,” said Steve Goldman, MD, PhD, professor of neurology and neuroscience, co-director of the Center for Translational Neuromedicine, and lead author of the researchers’ published paper in Cell Reports. “These findings have significant therapeutic implications and represent a proof-of-concept for future clinical trials for multiple sclerosis and potentially other neurodegenerative diseases.” The team’s studies represent the culmination of more than 15 years of research at URMC, understanding how supporting glial cells in the brain develop and function, and their role in neurological disorders, and are described in a paper titled, “Human Glial Progenitor Cells Effectively Remyelinate the Demyelinated Adult Brain.”

Goldman’s lab has developed techniques to manipulate the chemical signaling of embryonic and induced pluripotent stem cells to create glia. A subtype of these, the glial progenitor cells, give rise to the brain’s main support cells, including oligodendrocytes, which are the sole source of myelin in the adult central nervous system. Loss of oligodendrocytes or their dysfunction underpins a range of diseases in both children and adults, including hereditary leukodystrophies in children, and multiple sclerosis, white matter stroke, and a broad range of neurodegenerative and neuropsychiatric disorders in adults, the authors wrote. “As a result, the demyelinating diseases have evolved as especially attractive targets for cell-based therapeutic strategies.”

Multiple sclerosis is an autoimmune disorder during the course of which glial cells are lost, and the immune system attacks oligodendrocytes. As myelin is lost from nerve cells, their signaling becomes disrupted, which ultimately leads to sensory, motor, and cognitive deficits. In the early stages of the disease, referred to as relapsing multiple sclerosis, the lost myelin is replenished by oligodendrocytes. However, over time these cells become exhausted, and the disease becomes progressive and irreversible.

Studies have shown that hGPC preparations can remyeliate defined lesions in the adult brain and spinal cord. Prior studies have also shown that neonatally transplanted hGPCs can myelinate nerve cells and improve lifespan in the shiverer mouse model, which lacks myelin from birth because it doesn’t have the gene for producing the key myelin component, myelin basic protein (MBP). However, as the authors noted, it has not yet been demonstrated whether hGPCs can migrate extensively through brain tissue, which would be needed for more widespread repair of diffusely demyelinated tissue. “Indeed, to our knowledge, no previous study has systematically assessed the ability of hGPCs to either migrate within or remyelinate brain tissue demyelinated in adulthood.”

As part of their newly reported studies in different mouse models, Goldman’s lab tested whether transplanted hGPCs could migrate through the brain and generate oligodendrocytes that would myelinate damaged nerve cells.

In one set of experiments, the researchers demonstrated that neonatally transplanted hGPCS could restore myelination and improve functioning in the shiverer mouse. The results confirmed that intracerebral injection of hGPCs into neonatal shiverer mice resulted in the widespread dispersal of the human donor cells, followed by their oligodendrocytic differentiation and myelinogenesis. “Myelinogenesis was robust in the shiverers,” the team noted. “This ultimately leads to the complete or near-complete myelination of the recipient’s brain, brainstem, and spinal cord, attended by the clinical rescue of a large proportion of the transplanted neonates.”

A separate set of tests demonstrated that hGPC transplants could also restore myelin in a mouse model of multiple sclerosis, in which nerve cells become denuded of their existing myelin. When the human glia progenitor cells were transplanted into adult mouse models of progressive multiple sclerosis, the cells migrated to the sites of damage in the brain, created new oligodendrocytes, and replaced the lost myelin. The results also showed that this process of remyelination restored motor function in the mice. “These data suggested that transplanted hGPCs are competent to disperse broadly and differentiate as myelinogenic cells in the adult brain,” the team noted, “and that, most critically, they are able to remyelinate previously myelinated axons that have experienced myelin loss.”

The investigators say the demonstration that hGPCs can remyelinate axons that became demyelinated in the setting of oligodendrocyte loss represents a key proof-of-principle, given that “precisely such a scenario might be anticipated in disorders such as progressive multiple sclerosis, in which the remyelination of stably denuded residual axons might be expected to confer a functional benefit.” They concluded, “Together, these studies establish the ability of hGPCs to remyelinate demyelinated lesions of the adult human brain and provide a promising set of molecular targets for the modulation of this process in human cells.”

The researchers believe that as well as being applied to multiple sclerosis and pediatric leukodystrophies—childhood hereditary diseases in which myelin fails to develop—their approach could also be applied to other neurological disorders, such as certain types of stroke affecting the white matter in adults. Goldman is scientific founder of the University of Rochester start-up, Oscine Therapeutics, which aims to develop the technology further. The company’s experimental transplant therapy for multiple sclerosis and other glial diseases, such as Huntington’s disease, is currently under early FDA review for clinical trials.