Scientists generate millions of mature human cells, far more than have ever been produced 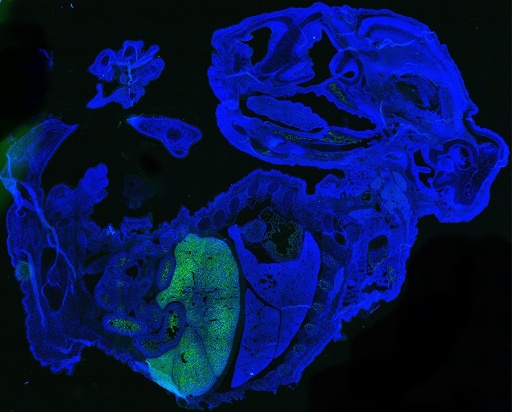 University at Buffalo
University Statements
Scientists generate millions of mature human cells, far more than have ever been produced
This figure shows a large quantity of human cells (labeled green) in a 17-day old mouse embryo (labeled blue). Most of the human cells are red blood cells, which are accumulated in the mouse fetal liver. (Image: Zhixing Hu)
“We wanted to see if it was possible for the human primed cells to go back to the naïve state, just like the pluripotent stem cells inside a mouse blastocyst. This is what we have done. ”
Jian Feng, PhD, Professor, Department of Physiology and Biophysics
Jacobs School of Medicine and Biomedical Sciences
BUFFALO, N.Y. — For decades, the enormous disease-curing potential of human stem cells has been thwarted by the inability to produce sufficient quantities of mature human cells in vivo — in a living organism.
Now, a team led by University at Buffalo scientists has developed a method that dramatically ramps up production of mature human cells in mouse embryos. Producing human cells in vivo is critical because cells made in a petri dish often do not behave the same way that cells do in the body.
The research was published on May 13 in Science Advances.
“This is fundamental research that allows us to use the mouse embryo to help us better understand human development,” said Jian Feng, PhD, corresponding author and professor of physiology and biophysics in the Jacobs School of Medicine and Biomedical Sciences at UB.
“Further development of our technology could enable the generation of even larger quantities of specific types of mature human cells to allow us to create more effective mouse models to study diseases that gravely affect humans, such as malaria or COVID-19,” said Feng.
And because this method produces so many mature human cells, it could potentially generate materials to treat chronic diseases, such as diabetes or kidney failure, by replacing a patient’s damaged cells with healthy human cells or tissues.
Infectious disease applications
Feng explained that it might be possible to create a much better mouse model of the human immune system or components of the human respiratory system in order to study COVID-19, a disease that wreaks havoc in humans, but barely affects mice.
It could also be possible to use the new method to produce mice with even more mature human red blood cells. Such mice would be very effective in the study of malaria, a disease which affects only humans by destroying our red blood cells.
“We have a lot of questions to answer before the technology can be useful, but this is the first time that anyone has generated so many mature human cells in a mouse embryo,” said Feng.

The human cells (labelled green) are eye cells in a mouse embryo (labelled blue) at 17 days. The development of human pluripotent stem cells injected in a mouse embryo accelerates to match the much faster developmental pace of the mouse host embryo. Normally, eye cells in a human embryo are generated at a much later stage. (Image: Zhixing Hu)
High resolution downloadable image of GFP Recoverin DNA
Millions of mature human cells in 17 days
Previous efforts to produce human cells in mouse embryos have generated small amounts of immature cells that are hard to quantify. In contrast, the UB method resulted in millions of mature human cells in a mouse embryo in 17 days.
In this study, the researchers injected 10-12 naïve human stem cells into a mouse blastocyst when it was 3.5 days old. The mouse embryo then generated millions of mature human cells, including red blood cells, eye cells and liver cells, as it developed.
“We know that up to four percent of the total number of cells in the mouse embryo were human cells,” Feng. “This is a low estimate because we cannot quantify the large amount of human red blood cells generated in the mouse embryo.”
He said that because these mature human red blood cells do not have a nucleus, they are not counted by the method that the scientists use to quantify the total number of cells.
The team’s technique involved overcoming an important challenge: Converting human pluripotent stem cells, which can differentiate into all types of cells in the body, into a form that is compatible with the inner cell mass inside a mouse blastocyst – a three-day old mouse embryo. The human stem cells are in a “primed” state, whereas the inner cell mass inside the mouse blastocyst is in a naïve state.
“When the primed human cells are put into the mouse blastocyst, they fail to develop,” said Feng, noting that the mismatch between the cells’ different developmental stages seems to be responsible.
“We wanted to see if it was possible for the human primed cells to go back to the naïve state, just like the pluripotent stem cells inside a mouse blastocyst,” said Feng. “This is what we have done.”
“Our method is to transiently inhibit the mTOR kinase for three hours to shock the human primed cells to the naïve state,” said Feng. “Blocking the mTOR kinase triggers a series of events that rewire gene expression and cellular metabolism so that the primed cells become naïve.”
Converting the later stage human primed stem cells back to an earlier, less developed naïve state allowed the human stem cells to co-develop with the inner cell mass in a mouse blastocyst.
“The injected human stem cells now develop at the much more rapid pace of the mouse embryo, supporting the generation of millions of mature human cells in 17 days,” said Feng.
In addition to Feng, UB co-authors are Zhixing Hu, Hanqin Li, Houbo Jiang, Yong Ren, and Boyang Zhang of the Department of Physiology and Biophysics, and Xinyang Yu and Michael J. Buck of the Department of Biochemistry, all of the Jacobs School. Other co-authors are Jingxin Qiu and Aimee B. Stablewski of the Roswell Park Comprehensive Cancer Center.
Funding for this research was provided by NYSTEM and the Buffalo Blue Sky Initiative.