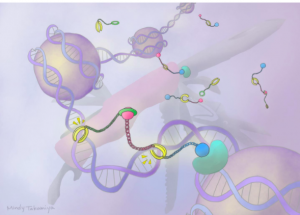 Over the coming weeks, I will be writing a series of blog entries on gene therapy using blood stem cells as a base cellular product. In the last few years we have witnessed an incredible return to the headlines for gene therapy now that safer, more accurate tools have been developed and clinical trials for a number of disorders have emerged with very promising results. Issues certainly remain – and this series will explore some of these – but, for the most part, gene therapy is in a renewed heyday.

The back story… trials and tribulations of gene therapy

The story of Jesse Gelsinger has always resonated with me. He was born eight days after I was in 1981 and, in my first week studying Genetics at the University of Western Ontario, he was headline news as the first person to have died in a clinical trial using gene therapy. Jesse was being treated for a disorder of the liver in which he lacked an enzyme that was produced by a single gene in the human genetic code. Four days after receiving the gene therapy, Jesse succumbed to multiple organ failure as a result of a severe reaction of his immune system to the gene therapy. The story is very well summarized in a recent article in the Science History Institute magazine that also highlights the other major setback of the gene therapy field in the early 2000s – the now infamous Severe Combined Immunodeficiency (SCID) trial.

In 2002, researchers conducted a trial in 10 patients suffering from SCID, colloquially referred to as “bubble boy” disease because patients lack a functioning immune system and are highly susceptible to infectious diseases. Nine patients were effectively cured of their disease but, in four cases, patients developed T cell leukemia as the apparent result of insertional mutagenesis (where the virus that delivers the gene therapy inserts into a place in the genome that drives a cancer). To this day, I cannot think of a better example of an experimental medicine that so powerfully demonstrates the potential and dangers of a specific therapy. In any event, it was absolutely devastating to the gene therapy field and set the field back considerably.

The benefit (and drawback in a way) of stem cell transplantation of gene-modified cells is that it can be self-sustaining for the entirety of the patient’s life and represents an effective “cure” for their disease. The drawback, as was so painfully experienced in the SCID-trial, is that the challenges of the disease and the trials in general can rear their heads at any time in the future, making for significant challenges in the regulatory space of gene therapy applications.

That said, the headline grabbing (both positive and negative) seems to be already in the past, and the real work seems to have begun to optimize methods and tools for efficient and effective therapies. Approximately 15 years later and the key issues of random integration and virus-induced toxicity have been more or less sorted by the introduction of either self-inactivating (SIN) lentiviral vectors or modified adeno-associated viruses that do not integrate easily into the host genome.

Much of the current work focuses on the base product itself: How do we get a sufficient number of successfully targeted blood stem cells to transplant into a patient? There are a number of key issues that remain and I will explore these over the next few weeks, as follows: generating more target cells (via blood stem cell expansion protocols); improving the targeting and/or efficiency of viruses that deliver the modified gene; and, scaling up the production of a safe and generic cellular product. I will explore some recent research in experimental hematology that could potentially address some of these issues and can be divided up into three main areas:

Area 2: Improving the efficiency of gene targeting in the stem cells that you do have

Following these laboratory research-focused articles, I will finish with a future perspective on the practical utility of gene and cellular therapies in medical centres across the world. There are significant challenges, both financial and medical, associated with cellular therapies that involve growing a patient’s cells for multiple days/weeks outside the body, and gene therapy will be an indicator for many researchers and companies looking to explore cellular therapies in the future.