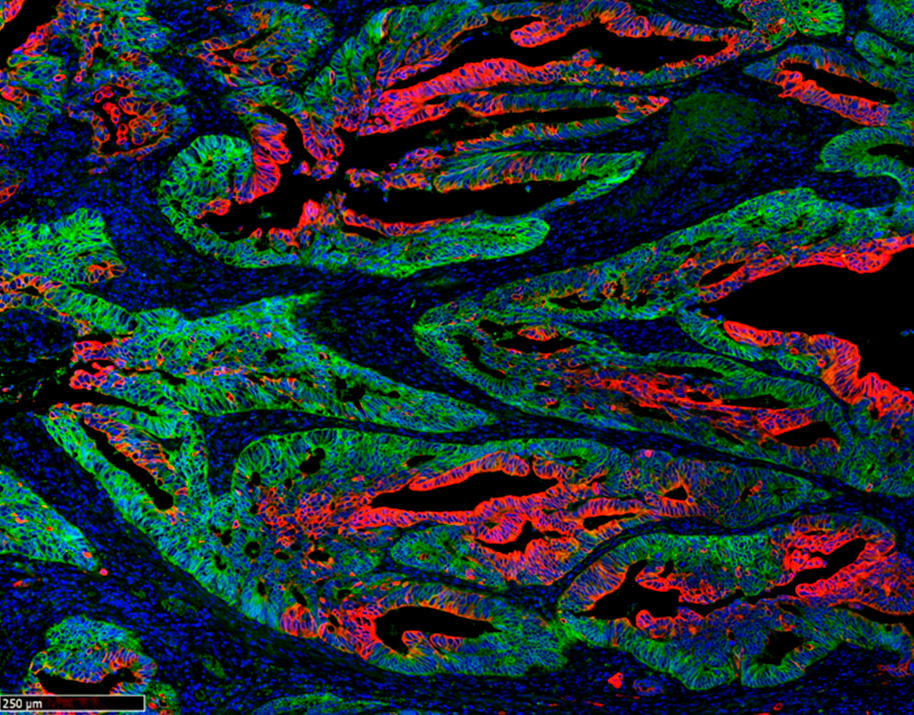 Tumours are not a uniform mass of cells. Colon cancers bear differentiated-like cells, similar to the functional cells of the intestinal wall, and pluripotent cells—the so-called tumour stem cells. The latter fuel tumour growth and cause metastasis. A group of scientists headed by Eduard Batlle, ICREA researcher,group leader at the CIBER for Cancer (CIBERONC), and head of theColorectal Cancer lab at IRB Barcelona, has demonstrated that the essence of pluripotency in colon cancer stem cells lies in their ability to synthesise proteins, a property that could be investigated further as a therapeutic target.

“Current treatments for colon cancer are not efficient because they do not eliminate all pluripotent cells. Various research groups, including ours, have observed that when cancer stem cells are removed via experimental approaches, other differentiated cells can return to a pluripotent state and regenerate the tumour. This is a phenomenon that we call plasticity,” explains Batlle.

In this study, the Colorectal Cancer Lab has observed that protein synthesis in tumours occurs in specific regions that coincide with cancer stem cell niches. Moreover, tumours exhibit a protein production gradient, and once this activity is exhausted, tumor cells irreversibly lose their capacity to return to the cancer stem cell state. Thus, it is their biosynthetic capacity which allows cancer stem cells to contribute unlimitedly to tumour growth.

“This discovery is an attempt to eradicate cancer stem cells based on their function rather than on their identity,” explains Batlle. “A desirable next step would be to investigate whether it is possible to therapeutically interfere with the biosynthetic capacity of tumour stem cells in order to stop tumour growth and prevent metastasis,” he adds.

“Using mouse models of colon cancer, we observed that by blocking protein synthesis in cancer cells or by eliminating those cells with this capacity we could stop tumour growth in an irreversible manner. The next step is to study the signals in the tumour environment that confer or maintain the biosynthetic capacity in certain tumour cells,” explains Clara Morral, first author of the study.

The work has been conducted using organoids—mini-tumours derived from patients that are grown in the lab—, which allow the study of tumour cell heterogeneity and organisation. The organoid culture system is a powerful tool to mimic the characteristics of the cancers found in patients. The study also involved genetic modification of tumour cells using CRISPR-Cas9. This technique allowed researchers to specifically eliminate cells with biosynthetic capacity and thus examine their contribution to tumour growth.

The study has been done in collaboration with the groups headed by Scott Lowe, at Memorial Sloan Kettering Cancer Center, Lukas Dow, at Weill-Cornell Medical College in New York, Alberto Villanueva, at IDIBELL, and Holger Heyn, at CNAG-CRG. This work has been made possible by funding from the ERC Advanced Grant, Worlwide Cancer Research Grant and AGAUR; and fellowships fromLa Caixa, Miguel Servet, Juan de la Cierva and AECC programmes.